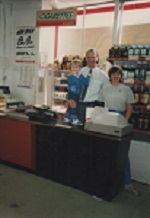 In June 1988 we moved, along with our soon to be two year old son, to Milverton from Hampshire. We bought the village shop, then a Spar, which we ran for eight years.

Our first customer was Mrs German, we still refer to her as Number One when we see her about. We knew the building needed lots of remedial work and that began soon after we moved in. Vaughn Udall with his three sons and Kevin Puttock did a grand job. The main beam that supported the ceiling at the back of the shop was rotten and in need of replacement. It was quite a feat manoeuvring the new beam in through the front door of the shop and into place. It broke Geoff’s heart to have to close the shop for an hour!

Many of you may remember Pete, aged two or three, hurtling down the slope from the stockroom in the shop in his little car. Amazing no one was injured.

In the great storm of 1989 the village was without power for two or three days. We managed to keep the shop open during the time with a borrowed generator and lots of ingenuity from our staff. I don’t think risk assessments had been heard of back then as we lit the shop with candles when it got dark.

It was a privilege working in the shop getting to know so many people. When we sold the shop on 1996 we moved to Colesmore where we’ve been ever since. Milverton is a lovely place to live and we are grateful we found it.