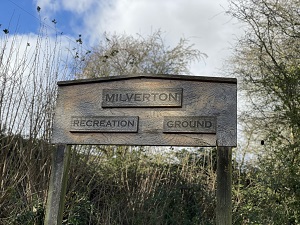 It is so good to hear the cheers and see cricket matches again at the Milverton Recreation Ground.

The land was purchased almost 100 years ago in 1923 by money raised by subscriptions from the village organised by the recently formed British Legion who gave £70.

The land called Swiftlys was being sold by the daughters of Rev George Saville Lumby Little who died in 1919. They were living at Pencraig now called Thorne House in High Street. The land was sold for just over £300, further land was bought bringing the total to £400.

Tennis, football and cricket was played and enjoyed, and in 1935 Miss Broadmead opened a new wooden pavilion.

A cricket pavilion was allowed to be built in the 1980’s which we still enjoy today.

If you have any further information about the Recreation Ground or any other aspect of the village, please email maggiedinning@gmail.com