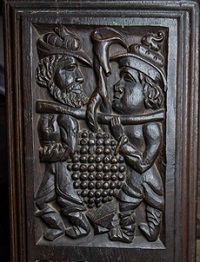 Most of the 150 or so bench ends and panels in Milverton church are of abstract design, but around 30 are representational, covering a range of subjects from images of men and women to plants, a ship, and coats of arms. One of the most interesting can be found in the south aisle towards the west end of the Church and illustrates chapter 13; verse 23 of the Book of Numbers. This shows two men carrying an impossibly large bunch of Grapes.

“And they came unto the brook of Eshcol, and cut down from thence a branch with one cluster of grapes, and they bore it between two on a staff”.

The story is that Moses and the Tribes of Israel, after years of wandering, had sent men, one from each tribe, into Canaan to find out what sort of land it was, because it was promised to the Israelites. Their report to Moses was that it was a good land,

“It floweth with milk and honey”, and presumably two of the spies brought back the bunch of grapes to prove it. But there was one drawback – it was already occupied, and the cities were strongly walled. The majority report (10 out of 12) was that the cities could not be taken. The people murmured against Moses and Aaron (and God), grumbling that they would have been better to have stayed in Egypt. God became annoyed and sentenced them to 40 years further wandering.

In the 15 Century, bibles were very rare, and generally held by the established church. Additionally, relatively few peoples were able to read. Hence the publication and distribution of the Biblia Pauperum, which was a kind of strip cartoon of sections of the Bible for those not able to read, about 90 pages long. One of the cartoons covered this story, and our bench end bears close similarity to the cartoon.