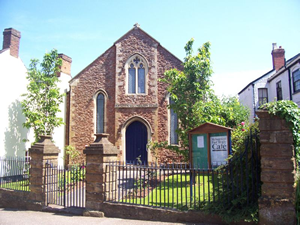 In about 1840, a Wesleyan Methodist Society was formed in Milverton. There was no Chapel, but they met in an ‘Upper Room’ which may have been at the Globe. Numbers grew, and at times 120 people attended and a permanent Chapel was needed. In 1849 The Methodist Building Committee gave permission for a Chapel to be built.

According to the Tithe may of 1842, there was an area call the ‘Iron Gates Estate’. The boundaries of this were between what is now the Chapel, and the Globe, going along Silver Street, down Turnpike and round into Houndsmoor Lane, stopping a way before the turning up to Rosebank.

In 1849, this estate was owned by a John Cridland, who agreed to sell a parcel of land for the building of the Chapel. This area of land contained a stable, a Smith’s shop and another workshop.

The building was finished in 1850 and had cost £222.00 Thirteen trustees were appointed. Some of them were tradespeople from Wiveliscombe. The only two Milverton residents were John Locke, a baker and William Lock, a shopkeeper.

In 1845 St. Michael’s Church had a refurbishment. The builder who did that work, also built the Methodist Chapel (as you look at the main chapel door from the outside, the large corner stone at the base on the extreme left is different, and it is thought that this might have been from St. Michael’s).

In the late 1800’s one of the popular Chapel meetings were the social teas, held twice annually. A guest speaker was invited; the ladies provided an excellent tea to be enjoyed sometimes by whole families. The local headmaster wrote in the school log in 1864 “Dissenters’ tea meeting caused several absences.” In 1869 he wrote “A few boys absent to attend a tea-drinking at the Wesleyan Chapel.”

The Chapel was served by two well qualified local preachers, Thomas Bowerman and Daniel Maunder, who shared services with the Circuit Minister.