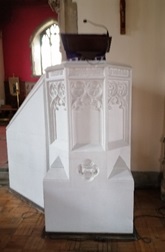 As several parts of the Church were in poor condition, including the south wall, which was bulging, a major reconstruction of the Church took place in 1849 to 1850. Included in the work was the replacement of the pulpit, which was taken apart and used to make cupboards in the vestry.

The new pulpit, of white stone/marble, to the design of Pugin was erected. As well as the usual tracery carving, was inscribed round the rim, “Blessed are they who hear the Word of God and keep it. Amen”. Near the base is a carving of the Lamb with a pennant. Apparently, there was no dedication, being merely an integral part of the repair and upgrading of the Church.

By the 1920’s, there was a feeling that the old pulpit be restored. In 1926, a resident of the village, though working in Derby, was killed in the Charfield railway accident in Gloucestershire, and his mother, Anne Jenkins arranged that the present (and former) pulpit be restored.

The dedication was carved into a panel “To the glory of God and in memory of Goodwin Philip Jenkins 1 May 1906 to 13 October 1926 this the ancient pulpit was replaced by his mother Anne Jenkins”.

The octagonal pulpit is made up from panels thought to be rather newer than the majority of the bench ends, possibly during the Stuart Dynasty, though still of Renaissance design.

The stone pulpit was sent to the Parish of Caerau, near Maesteg, Glamorgan, where a new church was being built in the mining village, and dedicated there by the vicar, the Rev C J Benyon.