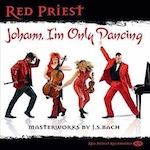 Saturday 16 October  at St Andrew’s Church Wiveliscombe.
Four-piece baroque super-group Red Priest were due to perform for Milverton Concert Society in March 2020. The concert had sold out, but, shortly before the concert, everything changed and we sadly had to postpone their visit.  So, here we are in October 2021 with tickets selling very fast for their concert on 16 October at St Andrew’s church,
Wiveliscombe.
We urge you to get your tickets as soon as possible and, as we are still operating a ‘socially distanced’ seating policy, we would encourage you to buy your tickets with friends so that you can sit together in a’ bubble’.
Red Priest is the only early music group in the world to have been compared in the press to the Rolling Stones, Jackson Pollock, the Marx Brothers, Spike Jones and the Cirque du Soleil!  They have become an international phenomenon, turning the period instrument movement on its head with its thrilling, no-holds-barred approach to the genre.
‘For sheer technical wizardry, charismatic showmanship, and expressive devilment, Red Priest is in an exhilarating class of its own.’ (BBC Music Magazine)
This extraordinary acoustic foursome has been described by music critics as ‘visionary and heretical’, ‘outrageous yet compulsive’, ‘completely wild and deeply imaginative’.
The programme at Wiveliscombe includes Bach, Vivaldi, Albinoni and Tartini.