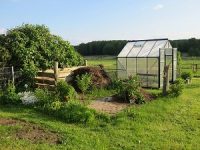 When the Parish Council set up a committee for 3 Councillors to inspect and advise on Milverton Allotments I joined Phil Young and Anita Dakowski. I did not know much about the Allotments and although I knew they existed I did not know exactly where they were. But I was curious to find out.

On our first visit it became clear that a map of the plots did not match many of the sizes, and some of the footpaths seemed to be in odd places. This made it difficult to identify the plot holder. All the plots had been measured in Rods, an old system of measurement – some of you may remember being taught about Rods, Poles, or Perches but I don’t believe they were in common use!!

To make it easier to identify the plots and correct paths Phil decided that it would be easier if everything was measured in metres. So we undertook a re-measuring project of all the plots.This proved to be fairer system as some the plots we of odd sizes. We were also able to identify common paths and those which belonged to the plot holders. Phil made some wooden stakes and each plot was given a number.

The majority of plots were well cared for but some were badly neglected, the plot holders were contacted.

All the plot holders were invited to a meeting to discuss any problems and ideas for solutions. Water was at the head of their list, many have rain barrels but not all.

A grant from the Parish Council was applied for and given, and the allotment committee now had a budget to begin a Rainwater Harvesting Scheme for common use.

At this meeting 3 plot holders volunteered to join our Committee which adds valuable and current input.

The Allotments are a pleasure to visit, plot holders grow whatever they wish, resulting in varied displays of flowers, vegetables and fruit vines. Some allotment holders have sheds, some have seats and there are even some lovely home grown chickens!