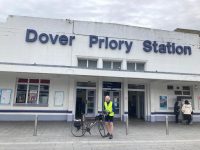 Having not cycled for many years in 2015 I was given a Dawes Super Galaxy bicycle which had belonged to my brother-in-law Richard who had died from cancer aged just 66. A couple of friends mentioned that they had bicycles and suggested doing some rides. These few rides soon became regular Sunday morning rides gradually building up to 30 mile plus with the Milverton Recyclers.

During lockdown after reading various books about long distance cycle rides, I planned cycling from Lands End to Milverton to just see if I could do it. It is 180 miles and it took me four and a half days.

As anyone who has cycled in Devon and Cornwall will know the hills are quite daunting but having made it home after a couple of weeks break I decided to try to raise some money for Cancer Research by cycling from Milverton to Dover along the South coast on the National Cycle Network (NCN 2).

I joined the route at Bridport and spent my first night at Dorchester. The next day I cycled to Southampton which involved the Chain Ferry from Studland to Sandbanks and the ferry from Hythe over Southampton Water. Day three included ferries over the River Hamble, Gosport to Portsmouth and on to Hayling Island before arriving at my B&B in Chichester. Day four once I got to Bognor Regis was cycling along the seafronts of Worthing, Shoreham and Brighton before reaching Seaford.

Day five began with an hours rain (the only rain on the trip) bypassing Eastbourne then over Pevensey Levels before cycling along the fronts at Bexhill and Hastings finally reaching my B&B at Winchelsea. The final day was cycling along the lanes of Romney Marsh then along the fronts of Hythe and Folkestone before a steep climb out of Folkestone past the Battle of Britain Museum and then a long descent into Dover.

The Milverton to Dover trip was 316 miles plus the 180 miles Lands End to Milverton was a total of 496 miles. Thank you to everyone who donated to Cancer Research which raised £1653.