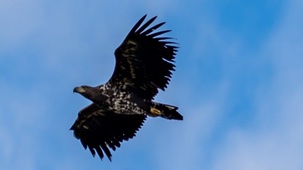 It is with great excitement that White-tailed Eagles can be once again seen in Somerset after an absence of over 200 years! White tailed Eagles or Sea Eagles are native to England but were driven to extinction through human persecution in the 17th century. The last breeding pair was recorded on the Isle of Wight in 1780.

Due to the hard work and persistence from Roy Dennis Britain’s leading expert in restoring wildlife, and his team. White-tailed Eagles were successfully reintroduced to Scotland where the population is now stable at around 150 breeding pairs.

In 2019 through a partnership with Forestry England and the RDWF the first cohort of 6 White-tailed Eagles were successfully reintroduced to the Isle of Wight only 4 of those birds survived. Now in 2022 it’s the fourth year of the project. There are currently 20 White-tailed Eagles in the wild which have dispersed across England.

In the first four years the young Eagles are very nomadic and can travel great distances. Some of the birds have spent time in Scotland, Yorkshire, the Peak district, Lincolnshire, Norfolk, Hampshire, Dorset and the Southwest. One female spent the summer of 2021 on Exmoor. She was released from the Isle of Wight in 2020 and has the leg ring code G405. The birds have been fitted with GSM satellite trackers which enables the team to track their movements and see how they are using the landscape.

In November G405 flew to Cornwall and one of the females released in 2021 has flown over to Exmoor she has the leg ring code G814. The vast undisturbed landscape of Exmoor provides a great habitat for the Eagles.

In the first winter the birds rely heavily on carrion with over 30 per cent of the diet being scavenged. Other items that they have been observed eating are rabbits, hares, waterfowl, gulls, and corvids. In summer and spring much of the diet is made up of fish.

If you would like to find out more about the project and the Eagles movements, go to Roy Dennis Wildlife Foundation.