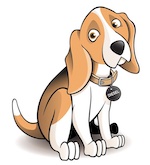 We have noticed during the pandemic an increase in dog walkers which in itself is no problem at all. But this has also resulted in an increase in dogs off their leads and totally out of their owners/walkers control, sometimes the dog is nowhere near their owner/walker and they are oblivious to the actions of the dog.

This has become a frequent problem and came to a head recently when a dog chased two of our cats into the barn where they would have been trapped had it not been for the cat flap fitted at the rear through which they could escape.

What made matters worse was when the owner/walker eventually caught the dog they couldn’t understand why we were upset. This was just days after another incident where a terrier was caught chasing our horses around their field.

Today a dog came into our yard, initially we thought the dog did not have an owner/walker as we could not see anyone then we spotted a bobble hat disappearing down the bridleway, they had no idea their dog was harassing our cats. Could we remind all dog owners/walkers that if they are not able keep their dog(s) under close control and within sight to keep them on a lead, some land owners may not be as tolerant in similar circumstances.