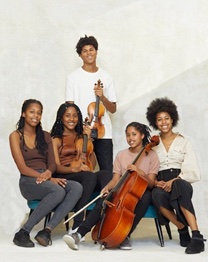 What makes the Kanneh-Mason siblings so remarkable?

Described by The Times as ‘Britain’s most musical family,” all seven members of this extraordinary family play piano, cello or violin.

As a family they have performed frequently on television and radio and have just received a Global Award for Best Classical Artist with their first album “Carnival” on Decca Classics, teaming up with Michael Morpurgo and Olivia Colman.

The five eldest performed at the Bafta awards in 2018 and all seven appeared in the December 2019 Royal Variety Show.

The concert at St Andrew’s church in Wiveliscombe will feature 5 of this incredibly talented family. Braimah, Konya, Jeneba, Aminata and Mariatu.