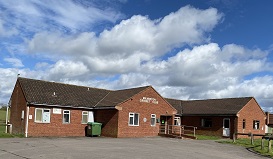 The Recreation Ground is located at Butts Way, Milverton. Available for large and small functions, facilities include a functional kitchen, toilets (including disabled ), car park, children’s playground and large grassed area hosting cricket and football facilities. A skateboard recreational area is located at the far end of the playing field.

Rooms in the Pavilion Clubhouse are available for hire with a fully licensed bar and catering services available on request.

For more information or to request a booking, please email John Coward at milvertoncricketclub@gmail.com

Over the last nine months the Pavilion has been subject to extensive refurbishment both external and internal to bring it up to a high level of comfort and interior decor. All windows and doors have been replaced with high quality UPVC units, the interior has been repainted with new curtains and soft furnishings. Further work to replace the guttering and facia boards is due to commence shortly.

A large, airy room with natural light from two very large windows overlooking the breathtaking view of the grounds and surrounding countryside. Ideal for large numbers of guests.

This is a smaller more practical room which is currently used for meetings, children’s parties and race nights. The room holds up to 30 guests comfortably and was formerly a snooker room.

This room also provides a recreational space where local youngsters can meet and socialise.

The land for the Recreation Grounds were purchased in 1923 by money raised by subscriptions from the village.

The British Legion organised fund raising. Over 200 villagers paid amounts ranging from £50 to 3d in old money. The land was being sold by the daughters of Rev George Saville Lumly Little who had died in 1919. They were living at Pengraig High Sttreet now called Thornes House.

The land called Swiftly was sold at auction for around £300. In 1925 the land where the now old toilet block is situated was purchased from the church for £110. The stable on it had been used by Mr Heale who ran the village shop in Sand Street and made deliveries in his horse drawn cart.

A pavillion was erected in 1935 and was officially opened by Miss Robinett Broadmead. In the 1980’s the Cricket Club were allowed to build a cricket pavillion on the land.